Girl's weekend and lots of sockknitting

Everybody has to have those special girlfriends that you can talk through the night with, about everything. And when I mean everything, it means everything. No matter if it's bad dates, deepest fears or something like you favourite sex position. I am lucky enough to have some of the finest friends somebody could wish for.
At least once a year we try to meet for a weekend of just us, as meeting up spontaneously has become increasingly difficult with two of them living far away, one having a family and all the other stuff everybody has been doing.

Our first trip was to Dublin two years ago and last year we just met up for a wellness-weekend in a town nearby. This time we decided to take it low-key as well, having a cozy winter-weekend with a sauna and a fireplace. We were pretty lucky to find a beautiful holiday home in an area with not much going on and therefore also very cheap. It was all we wanted for the weekend, we went running, sat in the sauna, sat in front of the fireplace and just talked a lot. In fact, we were pretty lazy.

I imagined our holiday with snow around us, which was not the case, but as I enjoyed sockknitting so much, I promised all of them to knit a warm pair of socks for them. (My ravelry page features a lot of sock patterns now) After finally deciding on the pattern and being finished with my "christmas-gift-knitting", I really had to throw in a lot of knitting time to finish in time. (Which I still didn't manage to do. Pauline's socks were only finished after the weekend. I wil give them to her the next time we see each other.)

The first pattern I knit was intended for toe-up knitting, which I have never done, so I figured, just knit top-down and it will work. It didn't though, the lizard in the pattern was much longer than the foot, so their heads are a bit anomalic, but the pattern in general is really cool. The next time I am going to make them I will give the other way a try. 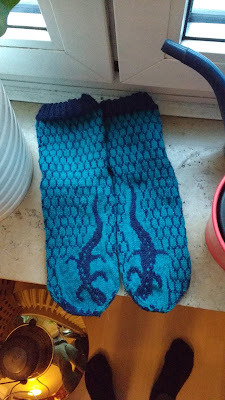 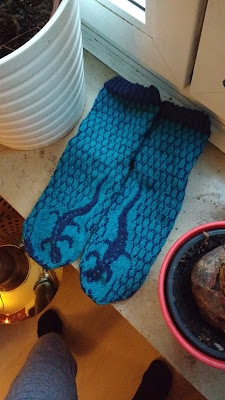 The second one I found on a request of my good friend Dani's who likes green and purple. The pattern features a lot more colours, but I loved it too much not to choose it. They took me some time, especially since the footsize was so big, but it was well worth it. 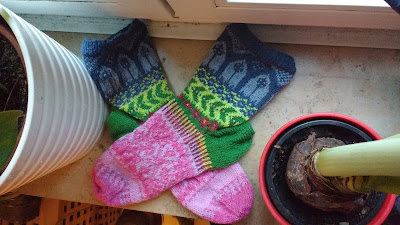 I had never knit anything in black and white and I love the effect those clearcut colours have in a pattern. The regularity of the pattern creates a very nice structure that keeps the feet nice and warm and I definitely recommend it. 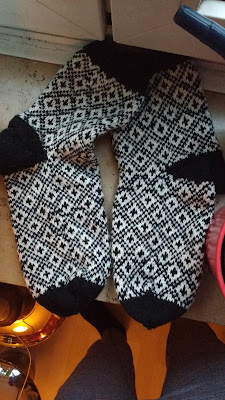 For the last pair I chose the blue and green colour which I thought would make a nice addition to the pattern I chose. It is nice, but the two socks are very different from each other, plus the color gradient creates a sharp contrast in the one full round that is knit when knitting the heel. Also, the original pattern has a pretty cool application with buttons in it. For time reasons I left it out, but the next time I knit this pattern I will include it. 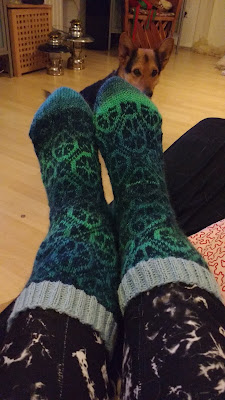 For now, not having anything I "have" to knit, I decided to tackle one of the bigger projects I chose for myself. Only a few days ago I started with my long planned Beatnik-Sweater in Marine Drops yarn. At first I was a little intimidated by all the different acbles of the pattern, but what can I say? I love it! And it is not nearly as hard as I imagined it to be. I made good progress and am already looking forward to wearing it. (Also I am glad to knit with only one colour for a change.)