For quite some time I was undecided on whether or not I should write this post, but I finally decided for it, because it is the story of a real hero, my grandmother and further generations of our family should know about it. Maybe her story can also help you appreciate the beautiful things in life. My grandmother has always be a touchstone in my life, a constant source of warmth. love and peace and probably the most inspiring and influential member of my family for me. 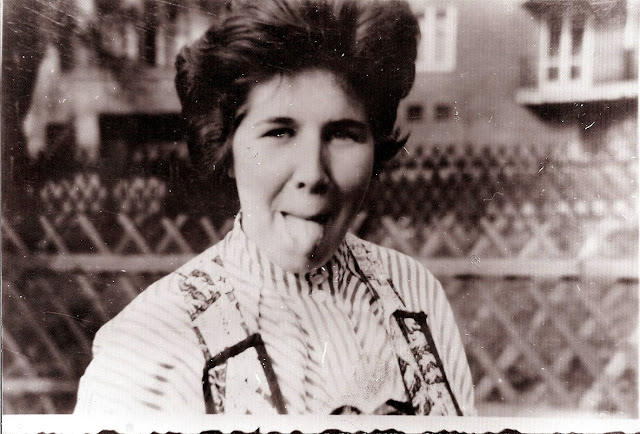 My grandmother was born in 1934 in a part of the East of Germany which today belongs to Poland. Due to the loss of these areas in the Second World War to Russia, her family had to flee to West Germany. I have only heard my grandmother talk about this by the end of last year when my grandfather died. I had known that he was a refugee, but that my grandma came from the area we call Schlesien was new to me. Her escape sounds like a dangerous and quite dramatic journey, where my grandmother, her two sisters and her mother found shelter in farms and in people's houses who helped them, but they eventually got split up. My grandmother does not like to talk about this time, but when I found a cute picture of her and a woman, while looking through old photos, she told me the horrible story behind it. The woman on the picture was one of the caretakers she had been given to on the journey to West Germany, a cruel, children-hating person that tortured the already traumatised kid even further. When my grandmother got sick, the woman put a cloth with boiled potatos on her chest and did not listen when the little girl complained that it was too hot. Soon, my grandma's chest was covered with hot, angry blisters. To "treat" the blisters, the woman took some needle and thread, poked through the blisters and ripped them open. I almost cried when I listened to that story and I have tears in my eyes right now- knowing the warm-hearted loving person my grandmother is today.

After the family had reunited they lived in a small flat in the time after the war. My great-grandmother apparently never got over the loss of her home and her old life, I have only known her as a very quiet old lady, not satisfied without a drink in her hand. Some tales the sisters of my grandma told, made it obvious that being depressed about the war, the poverty and having to leave behind her friends and her old life had made her a bitter person who could not give the girls the guidance and support that three teenagers might have needed. One story was unbelievable to me: Imagine the time of poverty and famine after the war. People ate what they could find on the streets and christmas present meant to have a good meal, or if it was your birthday you could call yourself lucky if you maybe got a cake. The three girls made the best of it and they had even adopted a small buddy, a Jack-Russell-terrier. Loving dogs myself I can imagine that the little fella gave them some joy in their hard lifes. Until he was gone. The neighbour had eaten him. 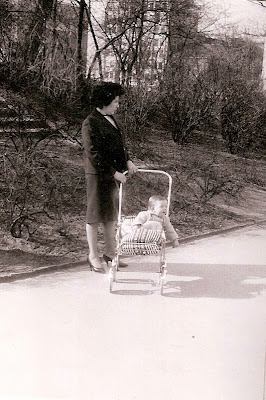 In the early 50s, my grandmother started to work as a housemaid for an English family. The Western sector was an English zone, which is why a lot of British soldiers and their families were positioned in the Ruhr area. Working for this family seemed to be a very happy time in my grandma's life, she often told me about taking care of the kids, their dogs and learning how to cook English meals. She makes fun of the baked beans and sausages, but I can tell that she loved to be in contact with another language and culture and kept her open-mindedness to this very day, which is quite untypical for German people her age. 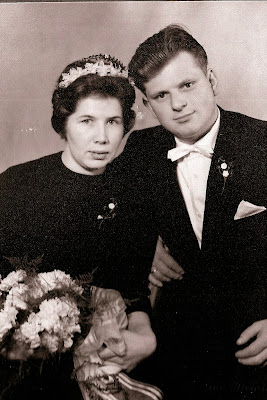 She met my grandfather in the late 50s, on a tram, and felt attracted to this handsome, younger man. The young, rockabilly looking man had also fled from Schlesien and charmed her into a relationship that ended in an unplanned pregnancy in 1958. It must have been very hard for my grandma, because although she loved my grandpa, she lost her job with the English family (she only told them after a holiday trip to Italy - my grandma knows how to make the best of a situation ;-) ) and had to move in with my grandfather and his parents. His mother did not appreciate her son's choice and they had to wait until my grandfather had turned 21 (being of age in the 50s), so they could get married, as the parents did not want to give them permission. This meant that only a few days before giving birth to my mom, they became husband and wife. My grandfather's mother - a strong woman, having fled from her home with four daughters and one son all on her own - made her daughter in law's life hell. Her first comment on the birth of my mom, who apparently had one foot bound to the leg due to a mild malpositioning was "And it's a cripple, too!" (Apart from being "just" a girl) 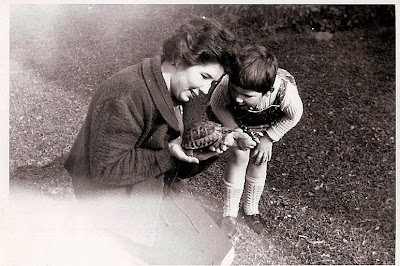 Life got better eventually, when the little family finally had the money to move into a flat on their own. The love for pets, especially dogs, cats and horses is a trait that connects my grandma and me deeply and made them have quite a few dogs. When my aunt got married to the owner of a horse ranch just across the street from my grandparent's house, my grandma helped out in the stables and with taking care of the horses.

In the sixties, my grandma got the driver's license (in our family she is famous for her fury behind the wheel, swearing at other drivers) and she got a job, with a hairdress some "Mad Men"-characters would be proud of. 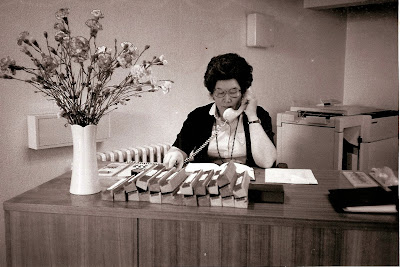 I got to know her as a loving grandmother, wonderful mother, always listening to people who needed her, always welcoming, there could never be too many guests in her house and even if you knocked on her door spontaneously today, she would welcome you in and offer you some of the most delicious food there is on the planet. She definitely is the best cook I have ever met. Her passion about people and pets, about crafting (she used to sew and knit, just like I love to do) and about enjoying life in general, even when it has not always been easy for her, are truly inspring to me and if I can say that I resemble my grandmother a little bit, and live to her example I will always be proud. I am grateful for this wonderful woman in our lives, who has raised three daughters, eight grandchildren and three great-gradchildren. May many more children to come get to know you and learn what it means to be "family".