One Sentence per Picture

Posted by Selina at 4:30 PM No comments:

Trip to the Northern and Baltic Sea 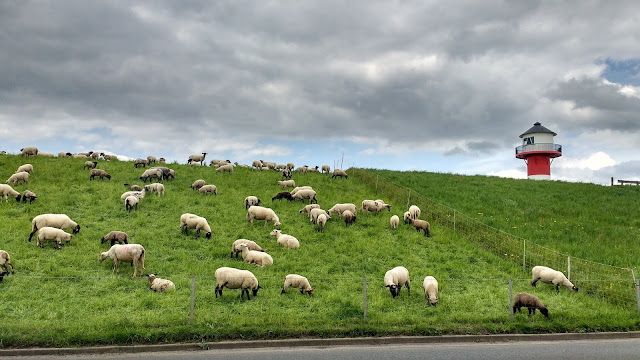 We have already had a couple of great trips in 2018 and I am so happy that we are using our campervan so often. When  we got it, three years ago, I was afraid it would be like so many things we have been doing, bouldering, bouncing, you name it, that we would pick up, be excited about and then would forget about it.

Apparently, there are more campervans registered in Germany than at any other time in history and it is true: more and more people we know have their own van.  Some friends are buying transporters and transforming them into the home on wheels they dream of. Others, like my aunt and uncle, rather follow our example and buy an old van that they can take off with instantly.

A few weeks ago a friend, Dominik, invited us to the surprise birthday party of Linda, his girlfriend. (Last year we spent a wonderful week on Fehmarn together. Check it out here.) As there was a holiday during the week anyway, we decided to take the whole week off and then slowly drive to Lübeck, where they are living. I was pretty excited as I always love to be at the Sea, even in Germany, where the Northern Sea often is rough and not very pretty and also, I have always wanted to go to the Alte Land, an area near Hamburg, famous for its many apple and cherry trees. In the beginning of May the apple trees were in full bloom, which made the trip extra special.

We started our journey with a stay in the beautiful little town of Greetsiel, a harbor town, famous for its to grand windmills, a red and a green one. My parents used to take me here on holidays, which is why the stay there was a walk down memory lane for me. Everything seemed so familiar, but being older I felt how touristic the whole town is and how small the center is. The weather was pretty typical of the region during those first days, it was rainy and windy- and the night held a big surprise for us: one of the fiercest thunderstorms I have ever experienced in my life. They are supposed to be more powerful on the shore and yes, the night was lit by all the lightning in the sky.

The next day we had a date with relatives of mine, where I had spent many holidays as a kid. They live on a farm, so I always had a lot of dogs and cats to play with, plus I remember running into the henhouse every hour or so, just to check whether there were any new eggs. I also always used to help my cousin out with her children while they were still little. She has got four of them and it had always been a great joy for me to help her out, while she was preparing at least four meals a day for all the hungry farm-helpers. We had always had a special bond somehow and I immediately felt the connection again, once we spotted each other. The kids are all grown-up now and I felt pretty old, remembering how I put diapers on all of them. We sat down for dinner and after all of the kids went out for a party night it was just us old people. You could tell that both of them, my cousin and her husband, were so happy having guests to chat and – drink – with. We drank a lot of Schnapps and beer, but surprisingly, still felt great the other day and after a wonderful breakfast, we headed off to Bremerhaven. Wilhelm had suggested we took the ferry instead of the newly built tunnel, as it was the only ferry of the kind and he insisted on us having a cup of coffee and a wurst on the ferry.

Sounded odd, but of course we obliged. Insider-tipps often are the best! Sure enough, the ferry, which only takes a few minutes to cross the Weser, has a little kiosk on it, where a cute old man sells coffee and wurst. He proudly told me that the wurst is made especially for the ferry kiosk and sure enough, the can said so. I had very little time to get back into the car; we were already landing on the other bank. Sitting in a parking lot, we enjoyed our delicious coffee and the Wurst with mustard. So good!

Bremerhaven is full of docks, ships and gulls. The camping-spot is right near the sea and the harbor. Sitting at breakfast, you can sometimes see huge ships go by, which feels really bizarre. The second day in Bremerhaven the sun came out and the city suddenly seemed like a different place. It won’t ever be my favourite I guess, but the docks and the architecture there are pretty impressive.

After our stop in Bremerhaven, we finally wanted to go to the Alte Land and wander around apple trees. Having a problem with vibrations in our tires we stopped at a garage and the owner, a camper himself, recommended a camper site right next to the river Elbe, even in front of the dike. Again, following a recommendation didn’t fail us: the site was gorgeous. The little villages called Steinkirchen and Hollern-Twielenfleth were adorable and right next to the site, there was a food-truck corner with benches and lots of friendly folks having a good time, while the sun went down over the river. I loved it so much that we were thinking about staying for a second night, which we rarely ever do. The weather was perfect, sunny, but not too hot, so we took a lot of walks through the neighborhood. The walking path even in the middle of the village, is on the dike, so that you can see all the beautiful old farmhouses and walk through the blossoms of all the fruit trees on the way. There are sheep, lighthouses and everything that is so typical about the Northern part of our country and I love every single bit of it! (Ok, the weather could sometimes be better, but we were pretty lucky for the rest of the week). After another day in the Alte Land we decided to have one last stop before arriving in Lübeck, also to avoid rush hour Friday in Hamburg. 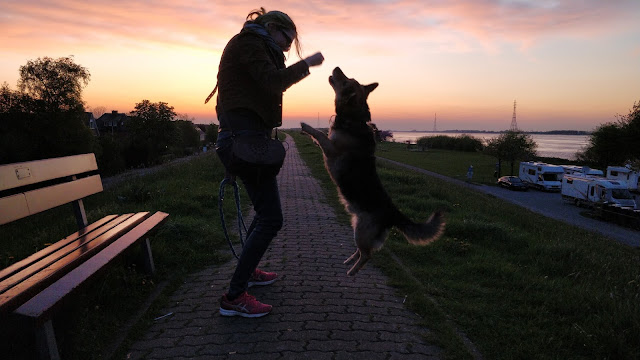 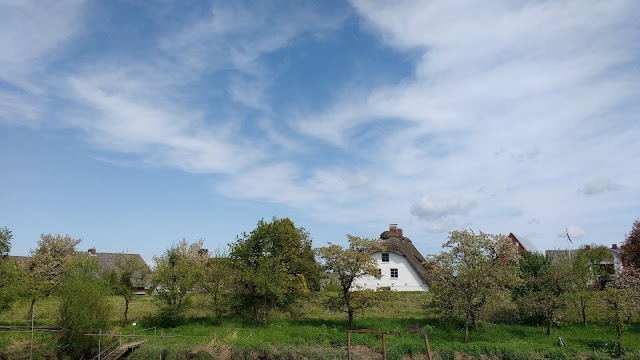 Ratzeburg has a pretty little old town, situated on an island in a big lake. The camper site there offers a beautiful view of the lakes and is in walking distance of the most beautiful old town buildings. All the water makes the town very beautiful, but when we were searching for a bar or a pub we were disappointed- Apparently the whole old town is like a home for the elderly and they don’t have that much need for evening entertainment.

The next day we conspired with Dominik to meet them in a beach bar in beautiful Scharbeutz and surprise Linda who was already sitting there with two other friends. The Baltic Sea looks so different to the Northern Sea, it is astounding. The weather was so good that some very brave people even took a swim. I cannot blame them, the water sparkled blue and turquoise just like in the Carribean.
When we came to Lübeck, more friends of Linda, from Düsseldorf, had already arrived and we had a little party, before more and more people arrived. The morning started with an awesome breakfast. Before we had to leave to walk into the old town of Lübeck, to go on a boat tour, which was just a perfect way to discover the city and enjoy the wonderful weather. After the trip, Linda had to pay some old customs due and as an unmarried 30-year-old had to prove her skills as a good Hausfrau and clean door handles on the market square, which all of us made it as hard on her as possible. It is custom that the unmarried woman has to do that until a virgin frees her with a kiss. (The men have to sweep the market square until they also are freed by a kiss.) It was pretty hot and – as you can imagine – we were all very drunk after a whole day of partying. But – the day was not over yet – a barbecue with a beautiful garden party followed and it truly was one of the best birthday parties I had ever been to. Everything was just so perfect, the company, the weather, it was really nice. And with another breakfast we said our goodbyes to the North and went back home again with many memories in our heads and already looking forward to our next trip, around Whitsun, in only two weeks.