Did you have the same problem as a teenager when it came to career choices like I did? I just couldn’t decide which way to go as I had so many different interests and every choice seemed to neglect most of them.  For a few months I thought I wanted to become a doctor. (My family was very enthusiastic about it, I got several 2 kilo-books for my birthday, in order to prepare me for my medicine studies…) I lost interest however when it became clear to me what life as a doctor meant: either long hours in the hospital and never having any freetime, or seeing the same old ladies again and again, complaining about their cough, their headaches, etc. while all they really needed was company. Well, that didn’t sound like my kind of plan.
I decided to study media science and English and I don’t regret it, as it is such a wide field, that I can do anything (and nothing) with it. Being someone who is getting bored quite easily I guess it was a handy choice. There is a part of me however who has always wanted to study psychology. The human mind (or also the animal mind) is such a fascinating field of study, I love to read books and articles about rationality (or rather the lack of it), differences / similarities between the sexes and different age groups, you name it.
One book I recently detected (still reading it. I have to admit, I am a cross-reader, meaning I am always reading several books at the same time. Normally it is a non-fiction one and a novel, so I can switch, depending on my mood – as told above, I get bored easily.) is “Thinking – Fast and slow” by Daniel Kahnemann. I hadn’t heard of him before, but it was lying around at a friend’s apartment and once I had read the preface I was hooked. 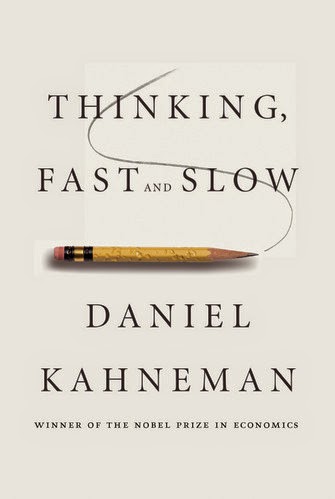 Kahnemann differentiates between two kinds of thinking (as the title suggests, dah) “fast” and “slow”. The fast thinking (System I) reminds a bit of intuition, it is the instinct, emotional response and doesn’t cost much effort. The slow thinking (System II) on the other hand is more rational and costs effort, which is why the fast thinking dominates. Most decisions need to be made instantly (taking a step to the side to avoid running into someone, e.g.; ), driving is a good example. In drivers school everything is incredibly hard and our brain feels overloaded with all the gear-shifting, braking and turning at the same time (while trying to avoid running someone over). With a bit of practice driving becomes more intuitive though and we almost instantly decide when to shift gear, when to stop, when to go on and so on. Parking however might always be something that takes some effort, and System II needs to take over. The division makes sense and explains a lot of phenomena, that Kahnemann describes in his book. Take a look at the famous example (almost everyone knows the “mistake” we make here)

Even though you know that the lines have the same length (System II working here), System I dominates the brain and makes you feel as if they are not.
Kahnemann also describes the anchoring effect, especially interesting for people who work in marketing. People make irrational and illogical assumptions, depending on the presentation of the problem. When asked whether they think it probable that a bad catastrophe will hit somewhere in the US, within the next ten years, killing more than 10.000 people, most people think this highly improbable.  When you ask whether they think it probable that a bad earthquake could hit California and kill more than 10.000 people within the next 10 years (which should be included in the first scenario), much more people think it likely to happen. All of us know about the forecasts of another bad earthquake in the area being overdue and so on, so the irrationality seems to make some sense and most of us would have made this mistake.
I like about Daniel Kahnemann that while he is certainly a very self-reflective mind, (thinking about decision-making so much should make you able to make more rational ones, shouldn’t it) he still likes to tell about his own mistakes and appears to be quite modest.
I can highly recommend his book, it is one of the most intriguing read I have had in a long time and it definitely makes me see my surroundings somehow differently.