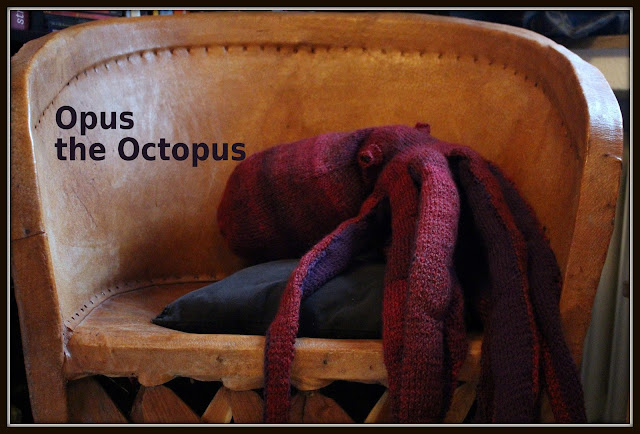 This blog was intended to share my progress and my findings in knitting and other handmade projects, so I am glad to have some "back to the roots"-post for you, about Opus the Octopus.

The pattern is free and you can find it here

I had bought some very nice coloured yarn in Estonia last winter, but it was incredibly scratchy. I knew I could not use it to make any kinds of clothes, so I searched for alternatives. Opus seemed perfect for the occasion. I am a bit sloppy when it comes to instructions, often I like them for the inspiration, but I am too lazy to actually follow them. No wonder my first Opus looked a bit sloppy, too. But a friend liked him apparently and asked me to make her one.

This time, I searched for two fitting colours of nice and soft yarn, I followed the instructions in detail and I also bought eyes for the little one. And of course, the result is much nicer. It is a lot of fun to knit something, that feels like coming "alive" more and more. You can see that the Opus with eyes looks much more liefelike. So, Nadine, you can come and pick your new flatmate up, he is waiting for you, while hanging out with his red and green friend.


Man's and woman's best friend, that is how we call our dogs. There is a reason for it, dogs do not (or hardly) judge us, they love us whether we suck in our job, fail the 100th time to lose weight or are socially incompetent.

From a very young age, as almost every kid, I dreamt about having a dog in my life. My parents had their reasons to not make this dream come true (Not true, I still think it would have been a pretty great idea), but when I moved out into a shared flat with two friends, we adopted Lily, a smart and pretty collie-mix, which has stayed with me after the two others had left the country. Since Lily's passing two years ago, the Schön family has been without a dog. We travelled and enjoyed some of the freedom that comes from being so independent, but life felt somehow incomplete. Everytime I saw a dog on the street, I yearned for having one of my own again. (A colleague once thought, interpreting my gaze, that I had spotted a baby, but no, it was a dog. Cute puppies touch my heart far more than babies, I guess that will never change.) 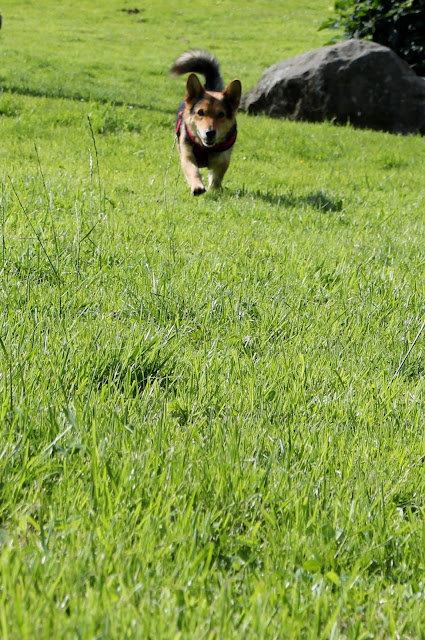 Several factors made it easier to decide for a dog this year: we bought a van, a camping-van with bed, kitchen, bathroom, which will make traveling by plane etc. less frequent, we will rather be driving around in Europe with our second apartment, as I like to think of it. Ideal for taking a dog with you. Plus, we would feel much safer with a dog in the car, while being parked in some neck of the woods. Furthermore, I reduced my office hours this year to write my PhD, which I can do from home. My tasks at work will change next year, meaning I will be more flexible.

After some discussion, even Mr. Schön  (the reasonable part of our relationship) did not have any arguments against getting a new family member, so we decided to search for one over the internet and in shelters in our area. We did not want to adopt a puppy, but an adult dog and I wished it to be a herding dog, appreciating their clever mind and their loyalty.

Living in an apartment, with jobs and limited free time we decided that getting a border collie would be a bad idea, as they need an extra portion of attention and space. By watching a show on animal planet (yes, watching tv can be helpful!) I learned that Corgis are in fact herding dogs. (They were bred in Wales to herd cattle). And they are small and cute, so I searched for grown up Corgis online. Turns out, Corgis are incredibly rare in our part of Europe.) However, we found a cute Corgi-German Shepherd mix who was described as friendly and relaxed. Sounded good.

We met Lisek (Polish for "Little Fox", he came from a shelter in Warsaw and looks indeed a little bit like a fox) at a foster ladies' home and loved him from the first minute. He was so happy to see us, as if we had known each other for years. Mr. Schön and him hit it off right away, playing around wildly in the grass.

We adopted him mid-July and he has been adorable ever since. I am sure that he has had suffered some hardship in his life on Polish streets (or maybe even forest, as he does not seem to be too familiar with city traffic), but from his character you would never know. He loves everyone! Any dog is eagerly approached, any person is greeted when they talk to him - it is adorable. And quite touching, at times. For us, this character trait is absolutely relaxing, as we know he will never hurt anyone, even if the other dog (or person) is less friendly. His legs looks too short for his body, which makes his apperance seem so harmless, despite of his German Shepherd resemblance, no one is ever afraid of him. A lot of people smile, when we pass them on the street, as he looks funny with his short legs and his big ears. I love how he seems to make people a bit happier whenever they see him.

Before getting a new dog, I read heaps of books about dog education. Lily had always had problems with separation anxiety and I wanted to be prepared to get the new dog to stay home alone. (As you can imagine, having a dog in an apartment, that cannot stay home alone without howling and barking is quite limiting.) Lisek had a hard time staying alone at first, but throughout the months we managed to get him used to be quiet when left alone. He was quite good at learning the basics, like "sit" and "down", but he did not seem to be nearly as clever as our old dog. After a few months at our home however, he has developed to much, it is pretty amazing. Although he has been relaxed in July, August and September, I have the feeling that only now, in Ocotber, he has started to feel sure about his home and his place in it, which led to much more cognitive ability somehow. He seems like a totally different dog from the one we got in the beginning. He did not use to play with toys or balls and now he cannot get enough of them. When he is off the leash he comes to me whenever I call, no matter if there are other dogs or a treat, etc. It is these small steps, that make having a dog so special. Not to mention the hours I spend outdoors, with beautiful sunsets, sun risings and pretty amazing sights and fresh air.  I will keep you posted about the adventures of little Lisek, we have plans for spring, maybe joining an agility club or even try mantrailing, as Liseks nose is superb and he likes to use it.