When your head seems to explode

This post is about a pretty serious topic, headaches. Or, more precise, migraines.

Migraines are still not always taken serious enough. Maybe it is because we live in a male-dominated world and much more women suffer from migraines than men, or it is because you can seldomly "see" the pain, headache-patients are often considered crop-outs; too lazy to work or using the pain as a kind of excuse for cancelling unwanted appointments.
I wish everyone suspecting this could have a migraine-attack once in their lifes, to experience the hammering pain, the feeling someone is carving out your eye with a blunt spoon and the bolts of pain that light or sound can shoot into your brain.

As you can tell I have been suffering from migraines for years and it is - thankfully - the only chronical disease I have to deal with. My attacks ususally only last a few hours, while other patients may suffer for days, but in the beginning of last year I had to deal with the pain quite frequently, usually once or twice a week. This had been going on for roughly twenty years, and as the attacks started to get more frequent, I was desperately searching for something to help my heacaches.

During my university time I took part in a study about accupuncture and migraines. The neurologist I went to had spent several years in China and I trusted his skills completely. After a few sessions I was pain-free for four months after the last treatment. Probably the longest I have ever been without migraine since I was about ten years old. I wanted to go on with accupuncture and found a doctor near my place who offered it. I had to pay for the treatments myself which meant spending more on that than I spent on rent. While I was a student. Long story short: It did not help me. Neither did a second doctor I tried out. Maybe it was their skills, neither of them had been trained in China and I suspected that one of them had only done a weekend-seminar on accupunture as he always placed the - very long - needles in different parts of my body everytime I came there. It just didn't seem right. After blood sputtered from a spot in my forehead where he had placed a needle, I never went there again 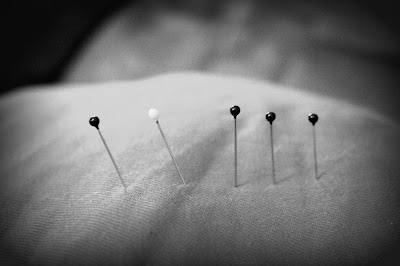 I have tried quite a lot of things to treat my migraines. After years of suffering and of trying things out I decided to let you know about my experience, maybe you can find a method that is working for you:

high dosed magnesium, taken preventative and in case of an attack

nutrition: not eating sugar for six weeks, resigning from alcohol, meat, cheese, none of them had any effect whatsoever

sports, will help to make you feel good anyway and might have helped a bit to prevent attacks

change your cosmetics, they might make you suffer. I just changed my toothpaste which basically is the only cosmetic brand I always stick to usually. To make it short: it did not help.

atlas nerve-correction: I had heard about this method from a colleague whose wife got healed from her headaches by a simple correction of her atlas (the most supervior cervical vertrebra of the spine). I went to a clinic to let them do an mri-scan of the spine and it turned out mine was fine, but I know people whom this method has helped big time, so no harm in checking it out.

The only pills that have helped me to ease an attack so far are triptanes, originally developed to help people with epilepsy, they also ease the pain and help you to fall into a unconscious dreamless sleep, that can be really mercifull, if you have an attack. They are the only medicamentation that have helped me so far, the problem is, they can damage your liver and kidneys and are very extreme methods If you take too many of them - as with every painkiller- your body might get used to it and react with pain if you try to live without painkillers. 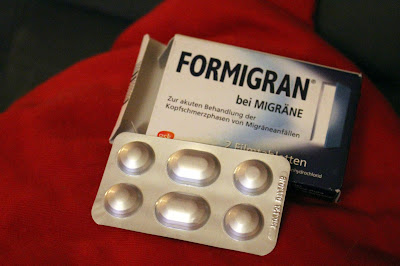 Acupunture: As I mentioned above I have done acupuncture with amazing results. I started it again last summer and it is amazing ! This time I went to an expert in Traditional Chinese Medicine, TCM, whose place - tadaaa- is just across the street from our flat. I am paying for the treatments myself and it is rather a lot of money, but it is the only thing that helps. My migraines have become a very rare occurence  and I am so grateful to my doctor. I guess doing Yoga much more often and the relaxing atmosphere in the doctor's office with meditation music, warming lamps and blankets help the needles do their work, but after years of suffering from this horrible illness I feel blessed. We often only appreciate our health once we loose it and I invite you all to celebrate the pain you are not feeling right now.

I hope that maybe I could help some people with migraines to ease their pain a bit and to regain new hope that you might be able to change something about your situation.

Email ThisBlogThis!Share to TwitterShare to FacebookShare to Pinterest
Labels: Health


I have been a busy bee those last few weeks. We spent new year's in Lübeck, a wonderful town in the North of Germany and also went to the Baltic Sea. A cold walk, but glorious. I had thought Lisek would be totally excited to see the sea, but he was more excited about his ball, which helped to keep us warm in -9 °. He had his new (or let's say our new) GoPro on his back, I hope I will manage to cut the material soon, then I will share it with you.

Last week I had the final exam of my mediation course. Mediation - for those who do not know it yet - is a method of conflict management, where both parties learn how to talk and listen to each other. The course was a very fascinating time and I gained so much from it, including more self esteem. Nonetheless, it was a busy time, including writing a paper and giving a presentation about it. Now I am missing my fellow students a bit, but I hope we will manage to meet once in a while.

Did I tell you that Lisek now knows how to give paw and also how to stand on two legs and look cute? He is adorable and I am so happy that he is learning so fast. In the beginning, when we first got him in summer, he was having a hard time to learn and I was already thinking we have a rather stupid dog, which would have been ok, but it's great that now, that he has lived with us for some months is as clever as he could be. I have big plans for us, like agility and mantrailing, but let's see how far he is until spring is here.

Unfortunately, Lisek makes a mess whenever he is eating. The floor underneath his bowls always looked horrible, which is what I wanted to change. I took some of the most colourful oilcloth I have and tried to cut a bonelike shape. That didn't work out at all. Now I have some oddly shaped pad that I put underneath his bowls and can clean more easily.

Jeannine, one of my oldest and best friends, is visiting from Newfoundland, where she moved some years ago. As it was her birthday recently, I wanted to knit her a cap (as it is cold in Newfoundland). She loves unicorns, so why not unicorns on a cap? Although I am the proud owner of tons of knitting patterns, it doesn't include any unicorns. All I found on the internet was looking rather boring or stupid. So what did I do? I found the picture of a uncorn I really liked, printed it in the size I needed it and then drew it's silhouette on graph paper. The tricky thing then was to decide which parts of the edges were still belonging to the unicorn, which to the outside colour.


Yesterday, the weather was really nice, so I took Jeannine and her friend Arly from Canada on a stroll through the forest. It brought back a lot of memories as ten years ago, Jeannie and me always took our horses through this forest. The whole forest seemed familiar, the sounds, the scents, all the birds... It was especially interesting, as Arly and Jeannine are birds experts and we stopped from time to time to listen to the birds and have a look at them. I usually never do that and it was nice to pay some attention to the little singing cuties. It was like a lesson in mindfulness, just standing and listeing. Lisek was not convinced though, he got bored and wanted to go on.


And, as you can never enjoy too many puppy-pictures, I collected some of my favourite Lisek-photos for you. No need to mention that we have hundreds of pictures of him...

Posted by Selina at 2:53 PM No comments:

Email ThisBlogThis!Share to TwitterShare to FacebookShare to Pinterest
Labels: Craft

Happy New Year everyone! I hope you had a good party!


Traditionally I am feeling quite blue between the years, I guess it usually is a mixture of the dark weather, too much food and the after-christmas blues. Not this year, though. We met some friends of ours who moved to the North of Germany a few days before christmas, as they were visiting for a party and decided to celebrate New Year's with them. We had a great time up in Lübeck, which is a beautiful town, with lots of water and old magnificient buildings. The party was set in the firebrigade building (our friend is with the firemen there) a costume party, motto was "casino". Very cool. all the guys in tuxedos. We partied hard till the morning and then went home by foot. Glorious days with lots of good food and lots of walking the dog. Even a walk along the coast, in the coldest of weather, but nonetheless gorgeous! Lisek was wearing his (actually Mr. Schön's) new GoPro and filming the whole trip. (He also filmed our christmas at my grandma's and next year we will watch his director's cut)

Winter is always a time of redecorating and knitting, to make this time as cozy as possible. I got some knitting books for christmas and was inspired by the Norwegian patterns in them. I have to hurry to get the jumper for Marlon, our godson, ready. He is growing out of things so fast. Knitting baby stuff is the best, because they are finished quickly. I have been getting a bit faster at knitting though, (still slow...) 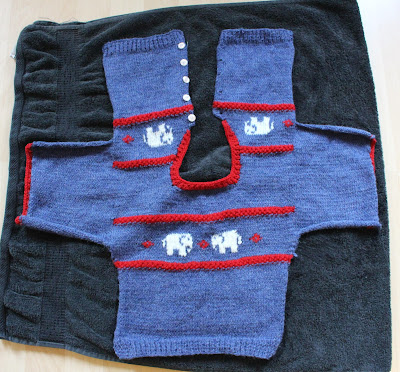 Redecorating... well I have much more plans, but time is rare, especially as I have just written my paper for the mediation course I am taking and started with Yoga and running again. 2016 is going to be an active year! So far I have only painted the elk hanging in our hallway. He fits much better to our wallpaper with his new white colour. 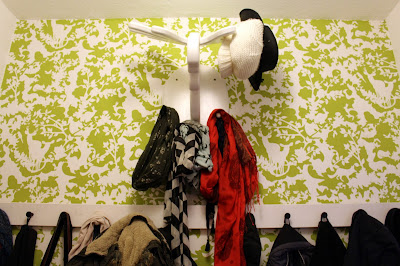 Posted by Selina at 3:30 PM No comments: